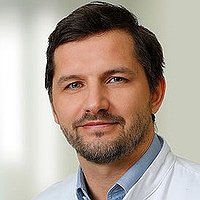 Stefan Stättner started his general and vascular surgical training in Vienna, primarily in a non-academic hospital focusing on a large workload of operative and endoscopic procedures. Besides broad clinical training and an early focus on hepatopancreatobiliary diseases (HPB) he developed academic collaborations in basic cancer research, mainly in HPB and colorectal malignancies. After completion of training in Austria, he completed a senior clinical fellowship in hepatobiliary surgery at the University hospital Aintree in Liverpool/UK, linking him to the UK and ending with being a member of the Royal College of Surgeon of England.

After 4 years at the Paracelsus Medical University in Salzburg setting up the supraregional HPB Service he moved to the Medical University of Innsbruck, where he was appointed clinical Lead for surgical HPB Oncology and in charge of research in this field of surgical oncology. Stefan Stättner is a powerful networker and board member of national and international societies (E-AHPBA and ESSO educational committees, EORTC GI Cancer task force). Together with his team he has been organizing several national and international educational meetings, always emphasizing the practical needs for HPB surgeons. In 2020 he moved to Salzkammergutklinküm OÖG, Vöcklabruk, Austria.

He is guest editor of European Surgery and wrote his scientific thesis (Venia docendi) at the Paracelsus Medical University in 2014 about “extending resectability in primary and secondary liver tumours”. He currently runs scientific projects focusing on the influence of radical oxygen species (ROS) during liver resection and immunophenotype and biomarker research during pancreatic resection.